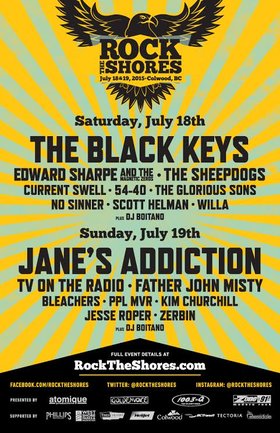 Two-Day General Admission and VIP tickets are on sale now!
Available at Rocktheshores.com, and in person at Lyle's Place and West Shore Parks and Recreation.

Edward Sharpe and the Magnetic Zeros

Edward Sharpe and the Magnetic Zeros is a band that was formed by Alex Ebert, vocalist of Ima Robot. Their first full-length recording, Up from Below, was released July 7 2009 digitally and July 14 2009 physically, on Vagrant Records. Their first show as a full band was played July 18, 2007 at the Troubadour in West Hollywood, California. more info

Fresh off an extensive U.S. tour, THE SHEEPDOGS are announcing a Canadian tour in support of their new album FUTURE NOSTALGIA. The tour kicks off in Montreal, QC on January 29th hitting more than 20 markets across Canada. Fans can watch The Sheepdogs socials for ticket pre-sale offers. Additional tour dates have been added in Toronto on February 6... more info

Current Swell are done with talking. “If this is our time, why don’t we take it?” singer Scott Stanton sings on Current Swell’s newest album. “If this is our life, why would we waste it talking the night away?” The band have been talking for almost a decade, now, and — make no mistake — talking well at that. And people have been ... more info
Audio: Shelter, Up The Hills, Get What's Mine
Videos:

Current Swell - "I Want A Bird" live @ the Commodore Ballroo...

other sites:
54-40 is one of the most important popular music groups to emerge from the Canadian cultural landscape. Celebrating their thirty-year anniversary – a remarkable achievement in itself - the band has an unbelievable catalogue of hit songs, including "Baby Ran", "I Go Blind" and "Ocean Pearl". Lead by chief songwriter Neil Osborne, 54-40 have carved... more info

No Sinnner is a new Vancouver, female, blues rock four-piece. Currently the band is playing gigs around BC and recording their debut EP, due for release this summer. more info
Submit info on this show to our admins