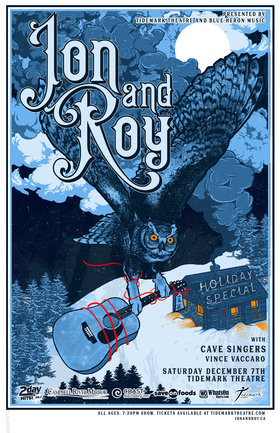 It’s easy to fall for the effortless, everyman charm of Jon Middleton and Roy Vizer. Seasoned musicians and long time friends, their brand of indie-folk is pretty much a genre in itself; evoking fog-shrouded mountains and evergreen treetops, sun-dappled beaches and the crackle of a campfire. With over 30 million streams worldwide, it’s clear ma... more info
Audio: Boon Elm, Any Day Now, Here
Articles: Jon and Roy at Sugar Nightclub, Roy Vizer from Jon & Roy – Interview
Videos:

A steadily-rising trifecta of talented bearded dudes, grown from the musically fertile grounds of Seattle, Cave Singers play indie-folk music borne of their surroundings. From deep, dark, and complex songs that instill a sense of being lost in the wilderness, to upbeat, washboard-tinged tunes that beg to be danced and stomped to around a campfire, ... more info

Vince Vaccaro (born 1980) is a Canadian singer-songwriter, guitarist and record producer. He has performed largely as a solo artist, appearing both solo acoustic, and backed up by a five to eight piece band. His musical influences include Bruce Springsteen, Ben Harper, Eddie Vedder, Adam Granduciel, and Matt Mays. Vaccaro has played shows in ... more info
Submit info on this show to our admins